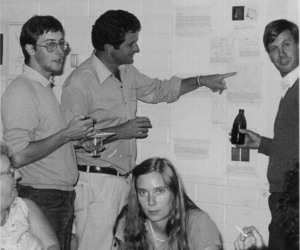 History and Foundation of ANS

The Australian Neurosciences Society was founded in 1971 as an informal group of interested Australian neuroscientists. It held annual, roundtable-format meetings from 1972-1980 with invited contributions to a central theme. Its organisers resisted the introduction of a formal society with free communications at its meetings mainly because they did not wish to compete with established discipline-based societies. However, as the result of a survey of all Australian neuroscientists in October 1979, it was decided to establish a formal society. After a vigorous debate regarding the name, the singular term “Neuroscience” was preferred to the pleural “Neurosciences” and so the new society became the Australian Neuroscience Society (ANS). At the 1980 Canberra meeting, a council was elected, which met for the first time February 1980 to draw up a constitution for the ANS. At the inaugural annual conference of the ANS held at Flinders University in January 1981, the constitution of the Society was adopted and the Society became incorporated in the Australian Capital Territory. Subsequently, at a meeting in 2013, the Society voted to change its name to the Australasian Neuroscience Society, to reflect the important contributions being made by New Zealand neuroscientists.

Annual conferences (now known as Annual Scientific Meetings) have been held since 1981, in late January to early February. At first abstracts were published in Neuroscience Letter Supplements 1982-1989, but are now published by the Society.

In 2020, ANS celebrates 40 years. Read the full historical account in the members only section. Contributions were made by;

The photos on this page are from the inaugural January 1981 ANS meeting at the Flinders Centre for Neuroscience.